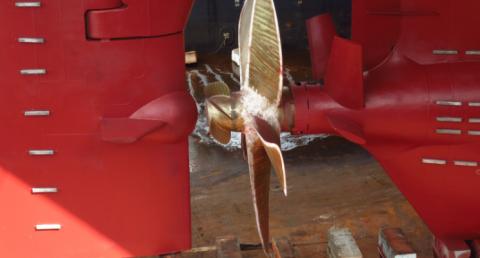 The following is an interesting article I in principle agree with but which, at the same time, misses the point (at least in my opinion, I am interested in hearing yours).

Actually the reason for some type of vessel designs becoming less efficient after 1990s is not due to the lack of simulation / optimisation of the hull, but in changed commercial requirements and in changes in the attitude of many shipowners.

Since S&P values are basically related to the size of the vessel (DWT) and to market trends and not to the actual OPEX of the vessels, shipowners have focused in getting larger capacity vessels, minimizing CAPEX and neglecting OPEX. We have seen vessels of very unfavourable L/B being developed. At the same time bulbs have almost disappeared on certain type / size of vessels. But this has nothing to do with simulations being performed or not.

If the general dimensions are not selected having propulsive efficiencyin mind (and today they very seldom are) optimisation can still be performed (and it generally isperformed!) but it is constrained, and the results are sub-optimal.

So why unfavourable main dimensions (L B T) are selected?

Easy: first one maximises T, the draft, but it is constrained by the harbours, and it was long since maximised, so little or no margin there. Then one considers L and B, the longer L the more expensive and longer it takes to build the vessel, so the next step was to increase B, beyond what economical from the propulsive point if view, while not modifying L.

In addition the shipowners of cargo vessels do not pay for fuel, the charters do. This create a further obstacle toward a "healthy" balance between CAPEX and OPEX.

Same is for the selection of the machinery, in principle low OPEX means the biggest propeller that fit the stern driven by a large and slow rpm engine. But this takes a toll on CAPEX, hence it is preferered to install small propellers and small fast engines.

This is ABC of ship propulsion, and simulation, or lack thereof, plays little role.

And if the shipowner ask the shipyard for modifications to the proposed design the extra charges rain down on him like cats and dogs. So this very seldom happens.

As far as container vessels we have seen a drastic increase in the design speed, which of course take a huge toll on efficiency (especially when measured by EEDI, which is a number with very little engineering meaning, if any).

Ships were designed for 26 knots, while trading at 22, and now probably at less than 20.

It is no wander than once "Liners" shipowners realised the "mistake" in the design speed many boxhips ships went for "plastic surgery" and got a nose job / new bulb.

Again, this was not due to lack of simulations, optimisation, model testing... it was due specific (possible wrong?) commercial decisions and constraints.

Having said that, are we doing all that we can to have vessels as efficient as possible? No. Improvements are possible!

Even with unfavourable L B T, it always pays to do the following:

1 - to optimised the hull line for the intended speed, taking into considereation also the added resistance due to the mean encountered sea state (forget sea margin, that will always give you a substandard design). In this phase it is also important to take care of the 3D wake at the propeller disk, ensutirng that it satisfies the so called "wake quality criteria."

2 - To select / design the biggest propeller that fit the stern of the vessel, matched with the correct revolution speed of the engine (propeller diameter and engine rpm are related, usually the optimum propeller is too big to fit in the stern, hence one normally should go for the biggest propeller diameter that fit the stern). Here the issue is that a lower rpm prupsion train (engine, shaftline, propeller, bearings) is more expensive than an high rpm propulsion train, but the savings in OPEX more than compensate the increase in CAPEX.

4 - to select a twisted / bulbed rudder, this basically gives 2% better efficiency, or more, but here there are added costs, also in this case it generally pays to do it.

If the above is done correctly the vessel is very close to the optimum and one can avoid ducts, fins, spoilers, appendages and the like.

What you NEVER want to end up with is the inefficient mess of Propulsion Improvement Devices (PIDs) as shown in the title picture (which I took in December 2015 in a SEA shipyard).

It looks like the propulsion, uhm, "expert", for lack of better knowledge, opted for an "all in" solution: 1 a strange plate at the trailing edge of the skeg, 2 Pre swirlers, 3 Conventional / low efficiency propeller, 4 PCBF, 5 Rudder Bulb, 6 Rudder Fins, 7 Rudder (apparently not of twisted type).

It must have been an all-you-can-eat shipbuilding buffet...