Noon Reports and The Sin of Taking Averages 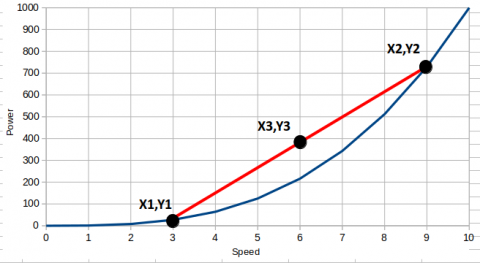 In a previous article, I highlighted that in respect to propulsion monitoring one of the biggest problems of noon reports, and of careless data manipulation, is taking averages. Here I try to clarify why. As usual some comments are "tongue in cheek", I hope the readers will not mind... but the article is not a joke, quite the contrary.

The main issue at hands is that a set of measurements satisfies the constraints and the laws governing a given phenomenon, while the averages of these measurements don't, or, better, they do only in case the phenomenon is linear (which happens quite seldom).

In other words, suppose having two records relevant to a given phenomenon (x1, y1) and (x2, y2). Suppose the average is (x3,y3), weighted or unweighted it doesn't make a difference.

If the y(x) equation describing the phenomenon is linear, (x3,y3) is both an average and, incidentally, a possible status of the system.

If the y(x) equation describing the phenomenon is non linear, (x3,y3) is only an average, a pure numerical quantity, but it is not a possible status of the system.

The reason is that when we take averages we (carelessly) remove the constraints linking the variables (in our case x and y), and these constrains hold a lot of information.

Let us a consider a simplified Power / Speed law

Let us consider two points on this curve, let us connect them with a straight segment. The unweighted average of the two points will be the middle point of the segment.

The time weighted average will still belong to the segment and proportionally closer to the point that the vessel spent longer time at.

(By the way, only weighted averages have statistical meaning, unweighted averages don’t, unfortunately too many people forget about this, and as a consequence most rolling averages are wrongly calculated, especially in Finance, but I am drifting. Search www for “average of averages” to find zillions of explanations about this blunder).

What is important to note is that the average point does not belong to the Power vs Speed curve. Therefore, while the original records satisfy the Power / Speed law, their average obviously doesn't.

That is to say that whenever taking averages we are neglecting the physics underlying the phenomenon we are investigating, and therefore we loose precious information, and we generate errors, and we end up with statistical noise.

When we use an average to investigate the status of a system, we make a blatant mistake, since that average, in principle, doesn't describe that system.

For the above reason, whenever there are some underling relations between variables, taking averages is a capital sin.

In order to analyze a system we need snapshots, not averages, not long exposures, definitely not noon reports.

Propulsion in particular is a non linear, therefore we know from the start that taking averages is a loosing proposition since we forfeit the congruency of the data.

Noon reports, in addition, are not just averages, they are 24-hour averages, and, as such, they lead to even larger errors and generate lager statistical noise.

For this reason, noon reports are only a simple management tool for accounting (and a tool of the past in that respect), and they serve very little purpose for propulsion monitoring, if any.

For the very same reason, noon reports cannot be used to speculate on generated air emissions of ships, since sailing 12 hours at 50% MCR and 12 hours at 100% MCR is not equivalent to sailing 24 hours at 75% MCR.

Again, this holds significance in case one is actually interested in speculating about air emissions to begin with. If the goal, instead, is just to fill in some modules serving the only purpose of satisfying some bureaucratic requirement (as generally it is the case) then all is game, apply ABC rule and be done with it. Probably the bureaucrats who wrote those requirements do take average of averages in any case.

Finally let me clarify the term "snapshot": snapshot is a snapshot, as short as possible, when taking a snapshot one points the camera and clicks, no panning, no long exposures, no Bulb setting.

To recommend some kind of 15 minutes short sea trial so as to average data is not taking a snapshot, it is confusing averages for steady states, yet again.

And this confusion is an even bigger capital sin than just taking averages.